With so many great speakers over the course of three days at OFFSET, it’s hard to pick out one as my favourite. Matt Willey’s talk may just be that one. 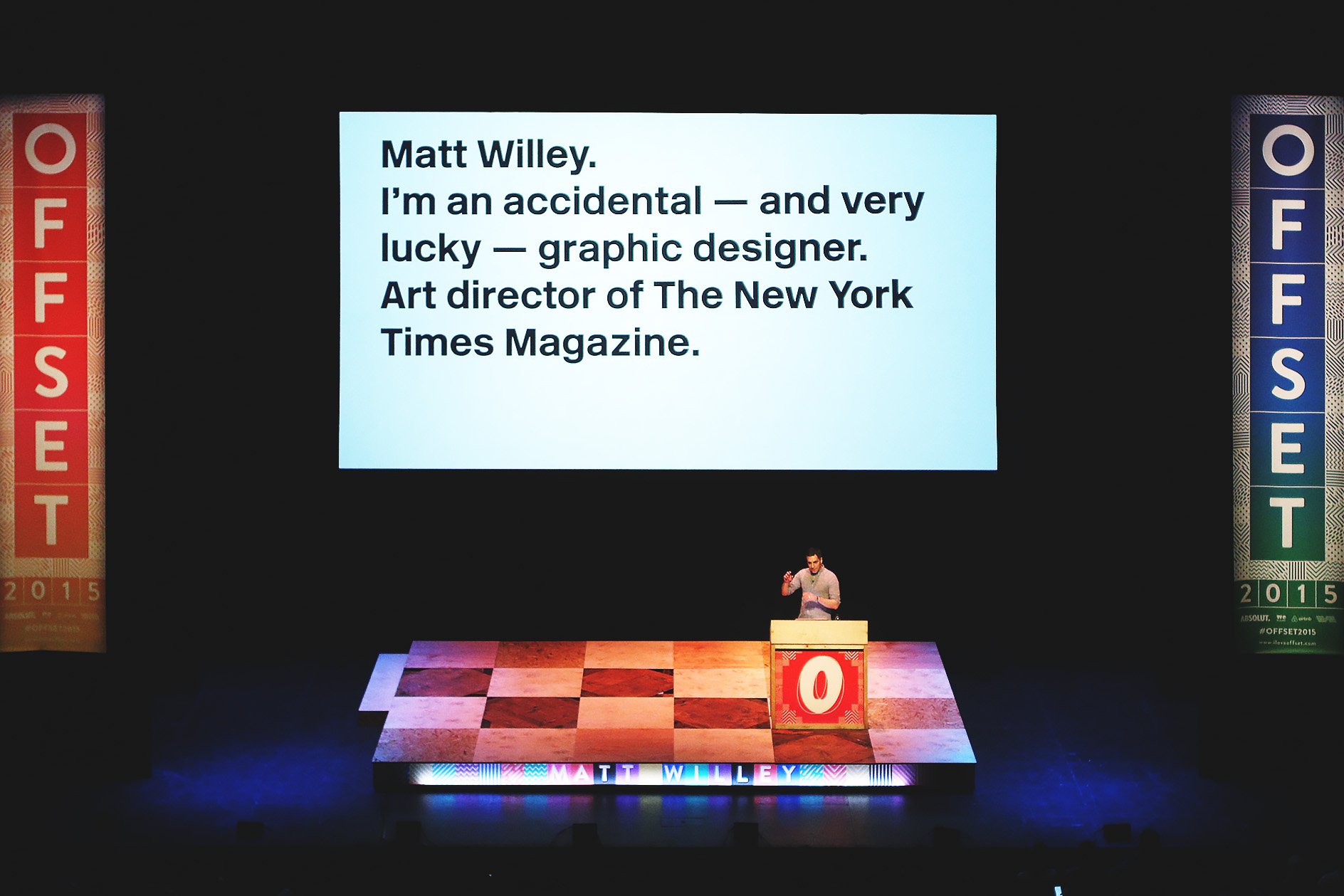 Matt came across as extremely modest and grateful for his career so far as a successful designer.

Before Matt stepped on stage, I’ll be honest and say I was unaware who he was. His name sounded familiar, though I may have been confusing him with the sports photographer Jon Willey. Having seen his presentation though, I will definitely be keeping an eye out for his work in the future! 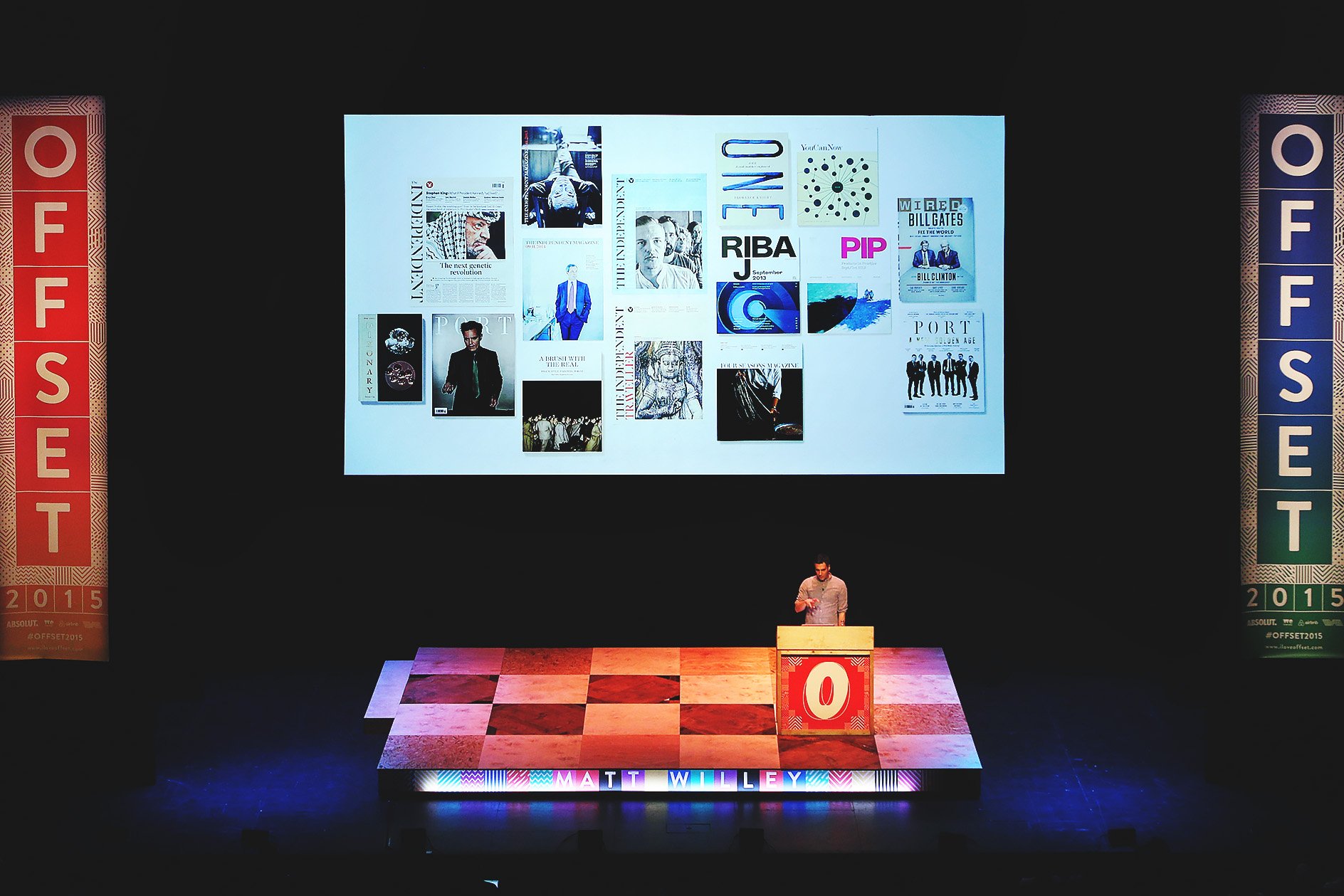 The structure of Matt’s talk was very simple and similar to other speakers who I engaged with most. He showed a small collection of previous work and quickly went through some images before leading up to a large case study on his work for The Independent. 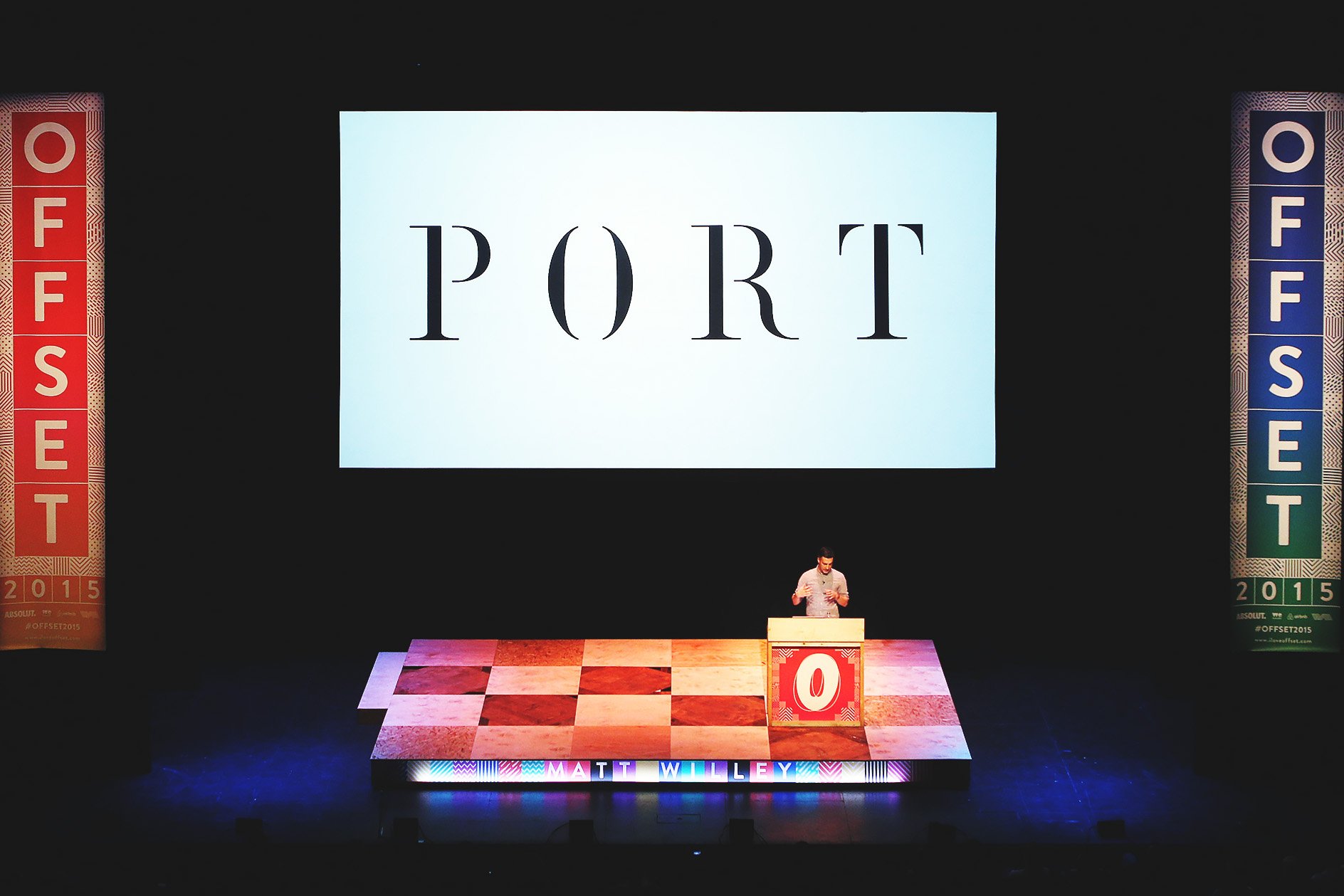 Matt co-created Port magazine with some of his close friends in his local pub.

Before his work on The Independent, Matt co-created Port magazine and lead the design with Kuchar Swara for the first couple of years. Amazingly, a heavy amount of the planning for the magazine was done in a local pub with some friends!

Take a look at this video showing how one of the covers for Port magazine that featured Philip Seymour Hoffman was created. It’s an interesting insight into how many variations and explorations are made, before a finalised output is created. If ever you need to shut someone down on how easy a “simple” design might have been made, show them this video.


Somehow, the popularity and appeal of the magazine grew fast and they were able to gain the interest of people such as Daniel Day Lewis, who featured in one issue and gave leads to other features for later issues.

Matt also showed some work from Zembla magazine – the first magazine he worked on. Alongside Vince Frost, they produced some great layouts with typographic experimentations. 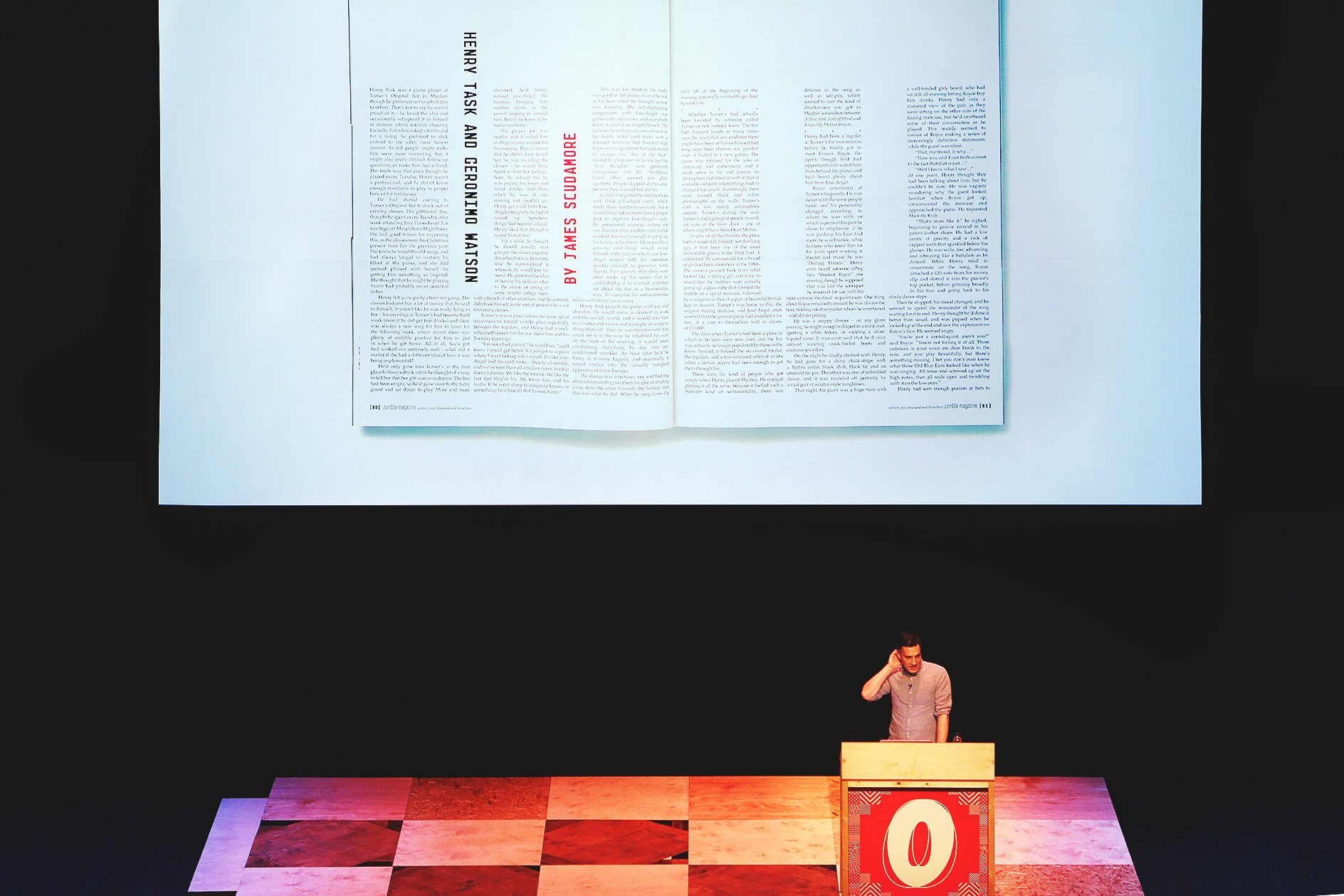 Some inspiring work from Matt including this article about a pianist using some playful typography in Zembla magazine. 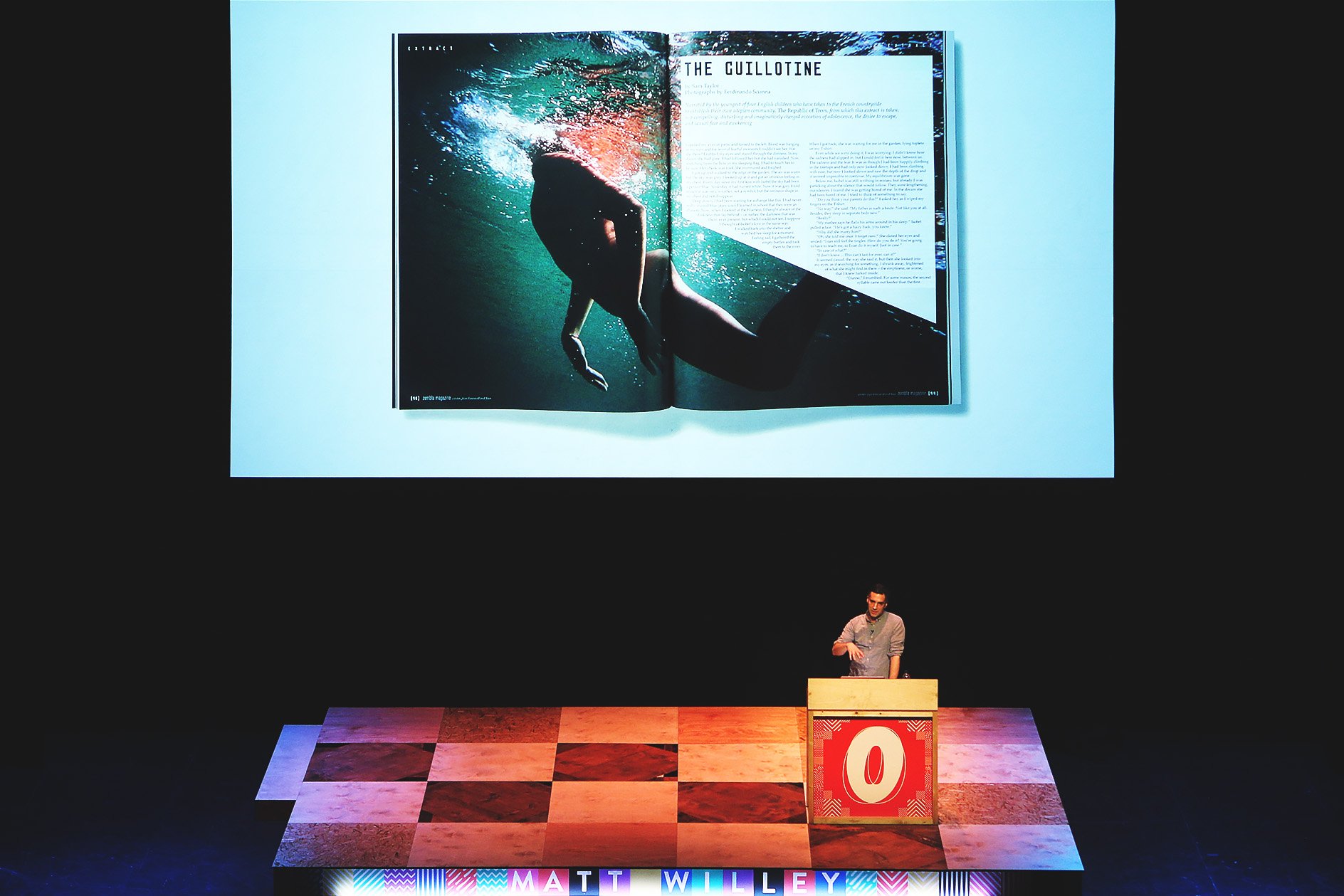 Some more playful typography representative of the content of Zembla magazine.

A lot of Matt’s work include very large typography, showing great use of scale in his designs.

Below is another video showing the exploration into the cover designs for Zembla magazine. As I’ve mentioned in other posts about speakers at OFFSET, it is always so much more engaging to see a collection of work in video format than simply clicking through a slideshow.


For his work on the Independent, Matt showed the process of how he and a few others crafted the new layout and typography for the newspaper and magazine supplement in an astonishing 3 months! 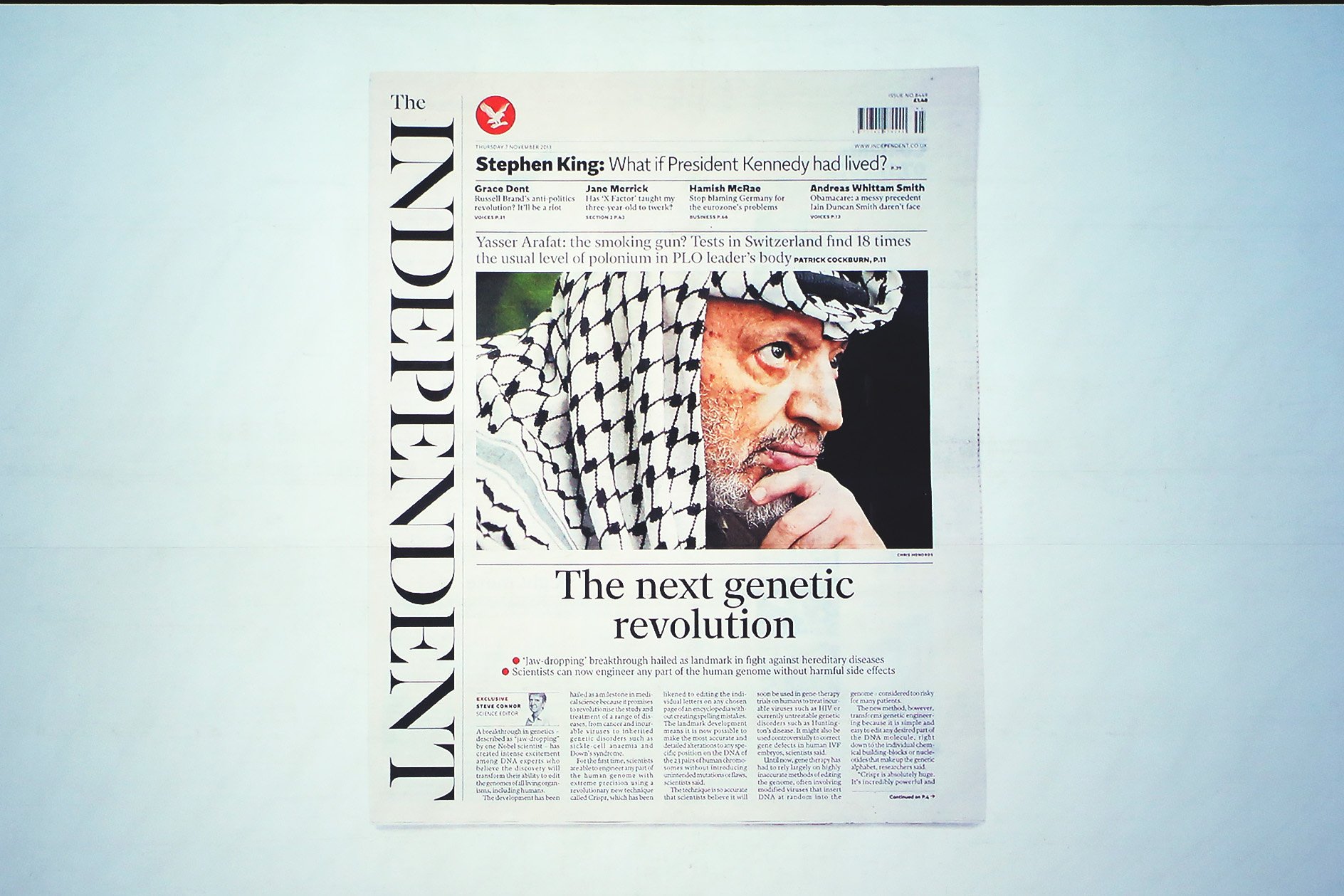 The redesign for the Independent was extremely inspiring.

I loved the way he showed the process of designing layouts in very short video form. As with other designers over the weekend, displaying work in pre-made videos seemed to be the most successful way of efficiently showing work without missing vital information. 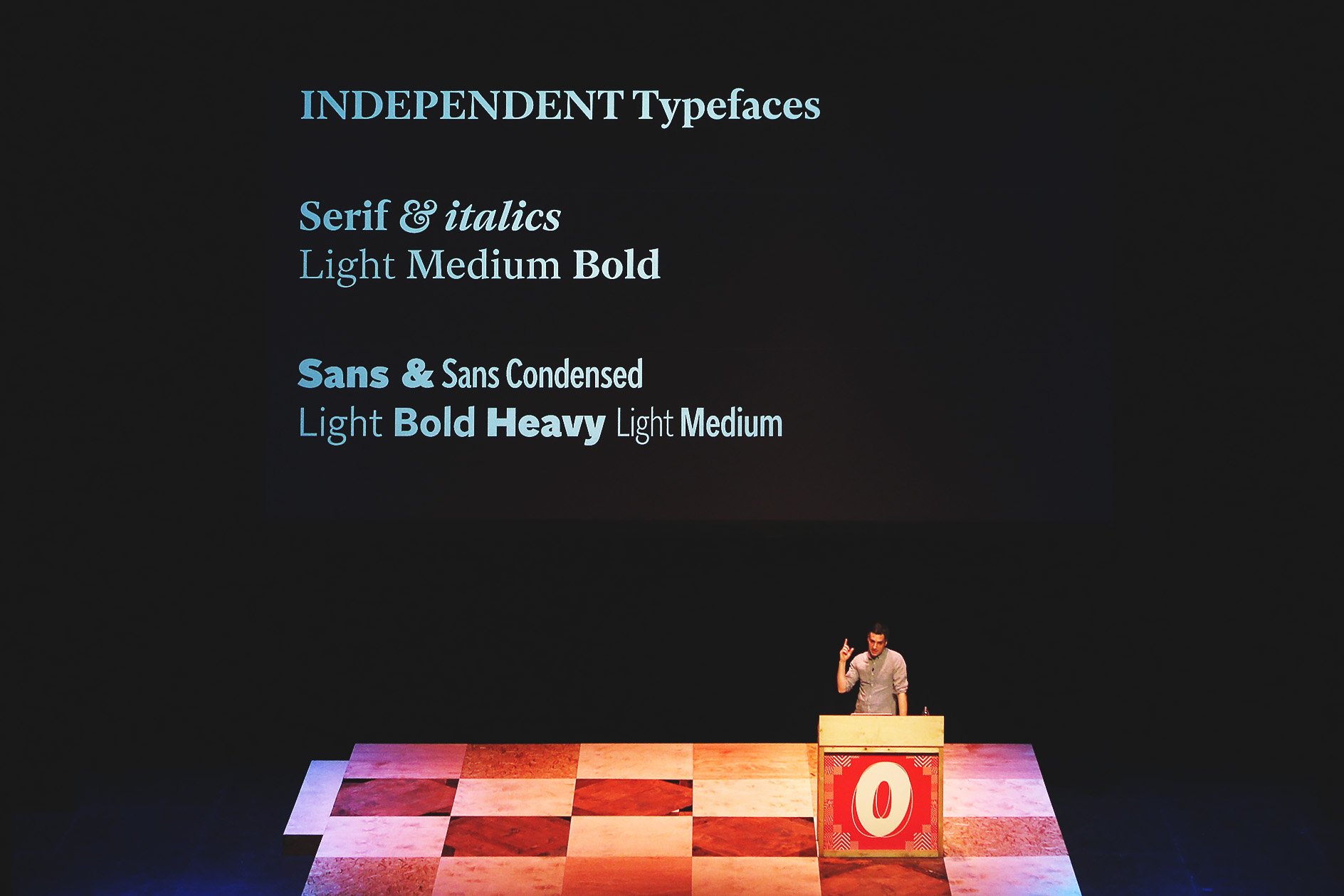 Incredibly, four fonts in multiple weights were produced for the Independent in only 3 months! 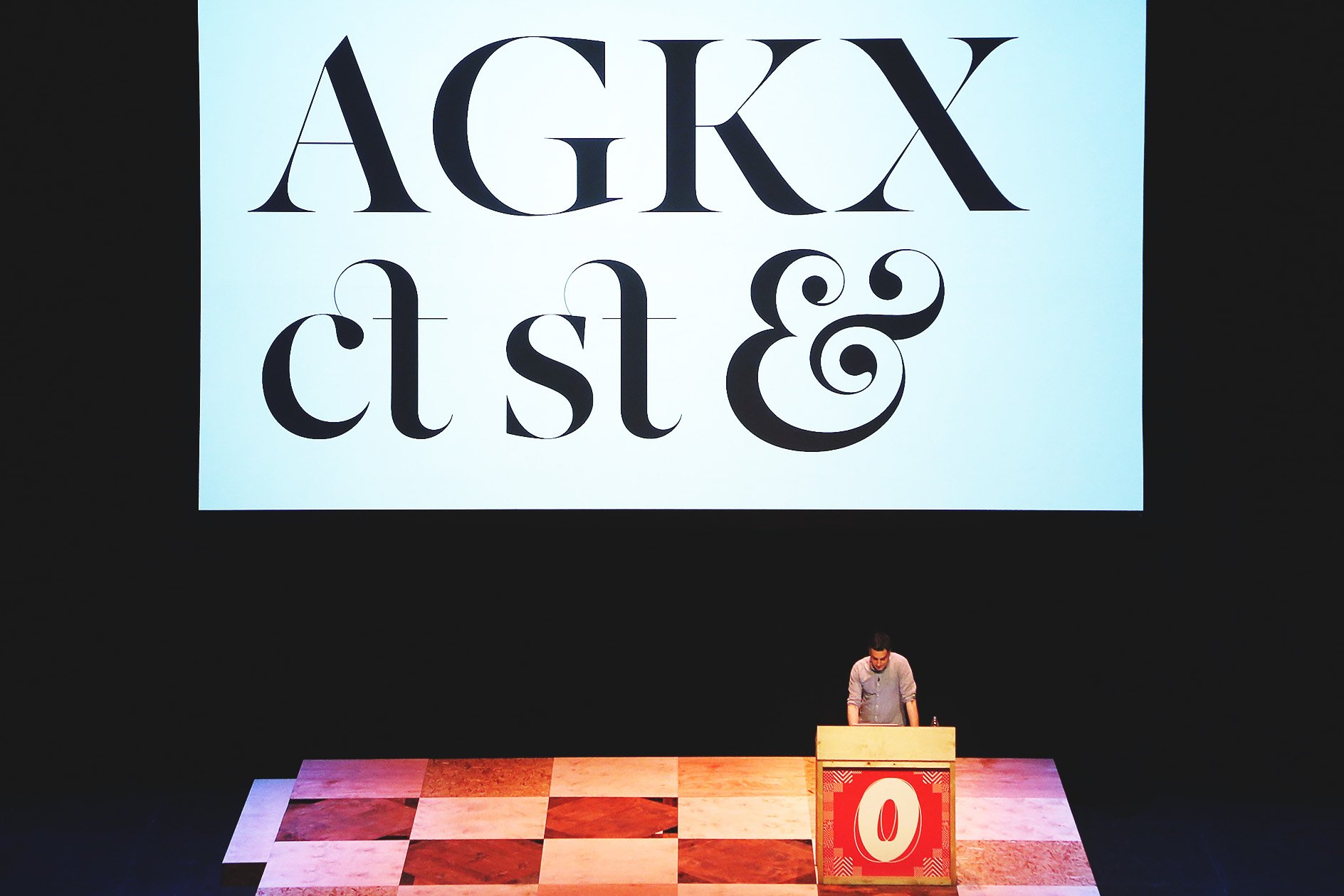 He displayed his work very modestly and came across as a very genuine and grateful person, calling himself “an accidental — and very lucky — graphic designer”. Now working at the New York Times Magazine as art director, he recently helped complete the redesign of that magazine, working alongside design director Gail Bichler; Matt seems set on a course of further success. Let’s just leave him to travel to every major newspaper and improve them all! 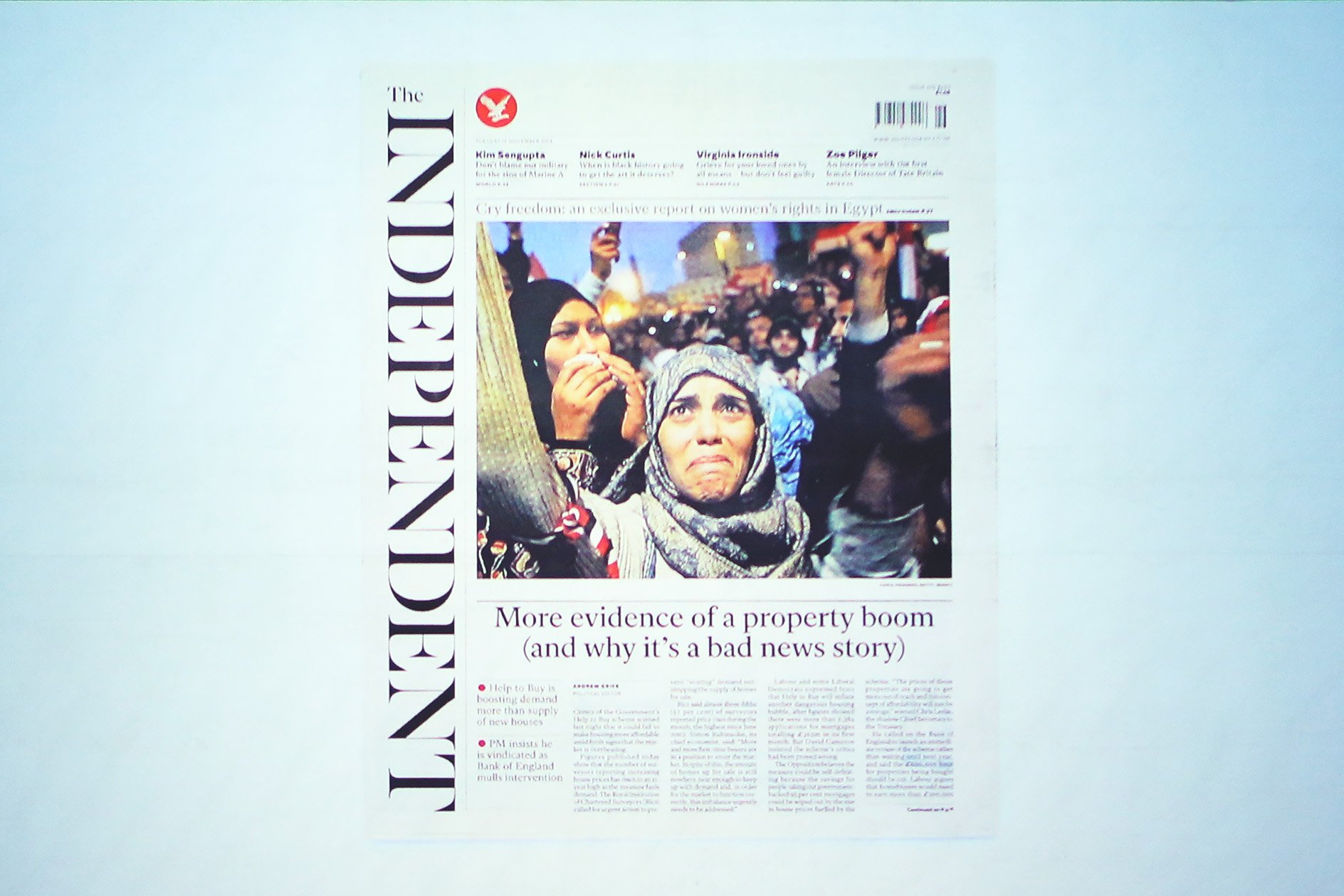 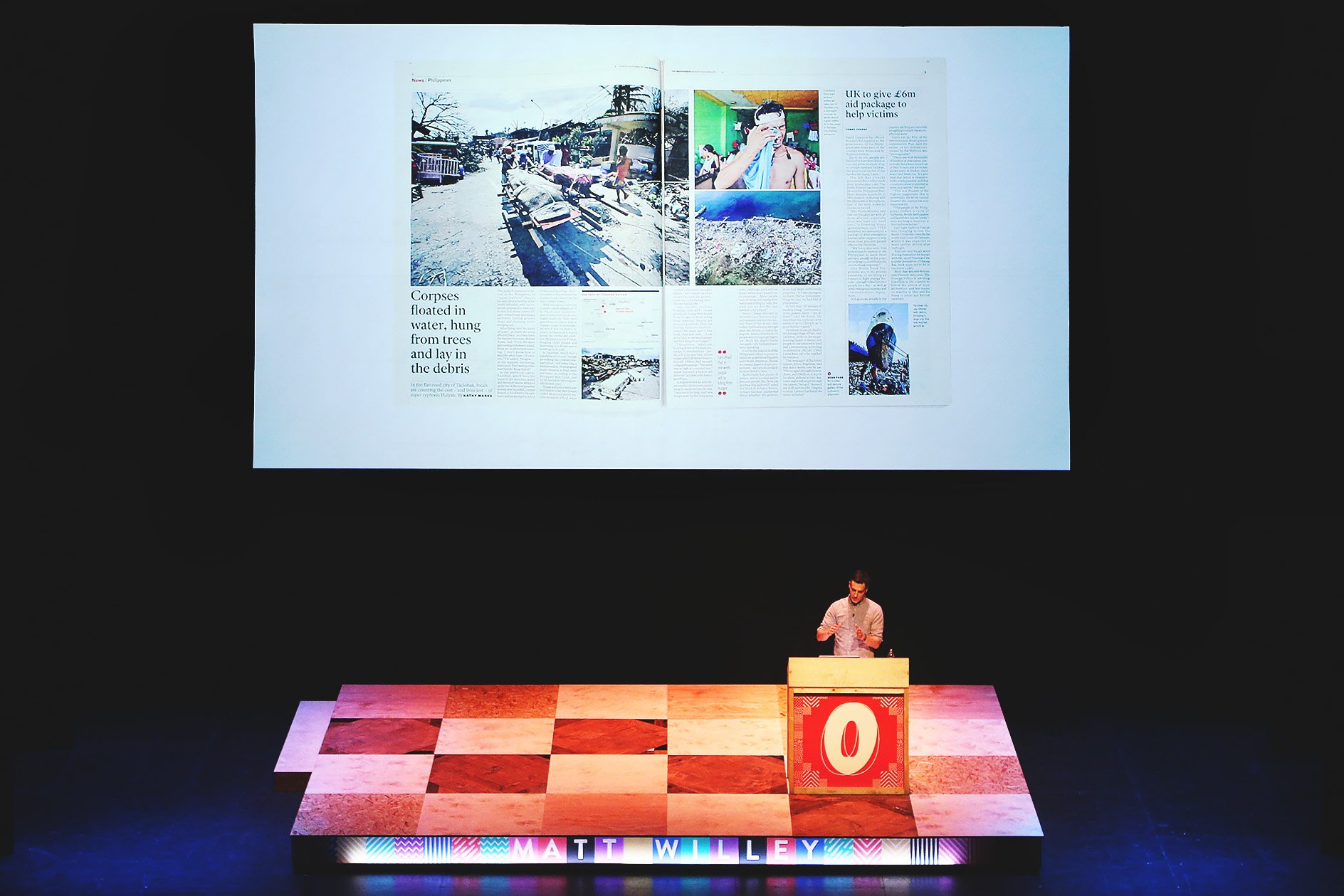 The inside spreads of the Independent were stripped back to basic layouts for enhanced elegance and usability for the people populating the content.

Of all the speakers over the weekend, Matt definitely left me feeling the most inspired. His work is simply incredible. Specialising predominantly within typography and editorial design, is something I am always in admiration for. Unfortunately, I don’t get many briefs for print related work, but Matt’s talk made me want to just jump out of my seat and shout about how much I love typography. And grids. And layout. I really need to find some magazine briefs…

Thanks for the talk, Matt. I loved it!

Go check out some more of his work at mattwilley.co.uk/