Since living in London, I’ve been trying to make an effort to get to some annual events across the capital. Two big sporting events that I have been enjoying for the past few years have been the London Marathon and The Boat Race. This coming weekend is the 160th boat race between Oxford and Cambridge Universities — the London marathon is actually the following weekend. Over the years the competition of the Boat Race has been fairly even with Oxford having won 77 times and Cambridge, 81. I actually have family ties to the name Cambridge and for that reason have always been a supporter of them. If you’re not from either city and didn’t attend either University or have the benefit of a family tie to the name, then pick your own team to support!

The race is televised of course by none other than BBC Sport. If you’ve ever watched sport on TV with me, you’ve probably had the I-love-BBC-Sport-and-think-their-broadcasting-is-the-best talk and will know how highly I regard the BBC for their sports coverage. There will be plenty of content to see filling in the time around the race as the main event is actually only about 15-20 minutes long. If you go to watch it live, you’ll probably see about 30 seconds of it! They go by pretty fast and then you can’t see them. The rest of the afternoon can be spent drinking on the banks of the Thames or relaxing in some of the parks showing the race on the big screens. I’ve watched the race from both sides of the river in the Hammersmith area. Once from the banks of the Southern side, quite close to the water and another time from the North closer to all the pubs, but on a raised walkway.

I’m allowed to find it hilarious, it happened to me once.

If you’re watching from the banks of the river, be careful not to get too close to the water as after the rowing boats calmly—but speedily—pass, there are about 30 other motor boats powering through the water which generate a LOT of waves, which will soon rise up to your knees if you’re not paying attention. If you’re watching from the North of the river, you’ll have great access to a range of excellent pubs as well as better transport connections from Hammersmith. For taking photos, you’re at more of a disadvantage because of the elevated height, but then you do get to watch everyone squirm on the other side of the river as the waves lap over them completely unknowingly — I’m allowed to find it hilarious, it happened to me once. 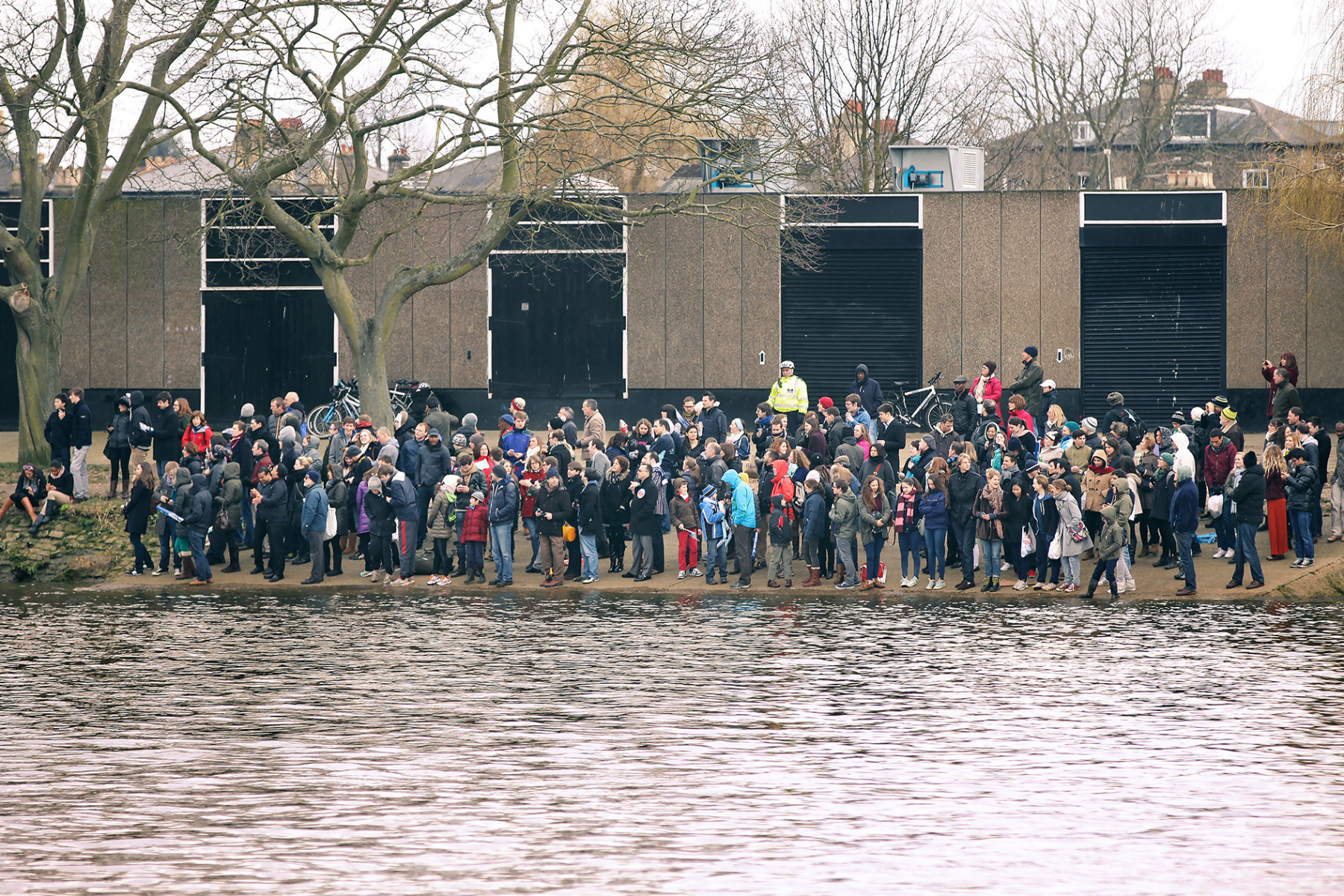 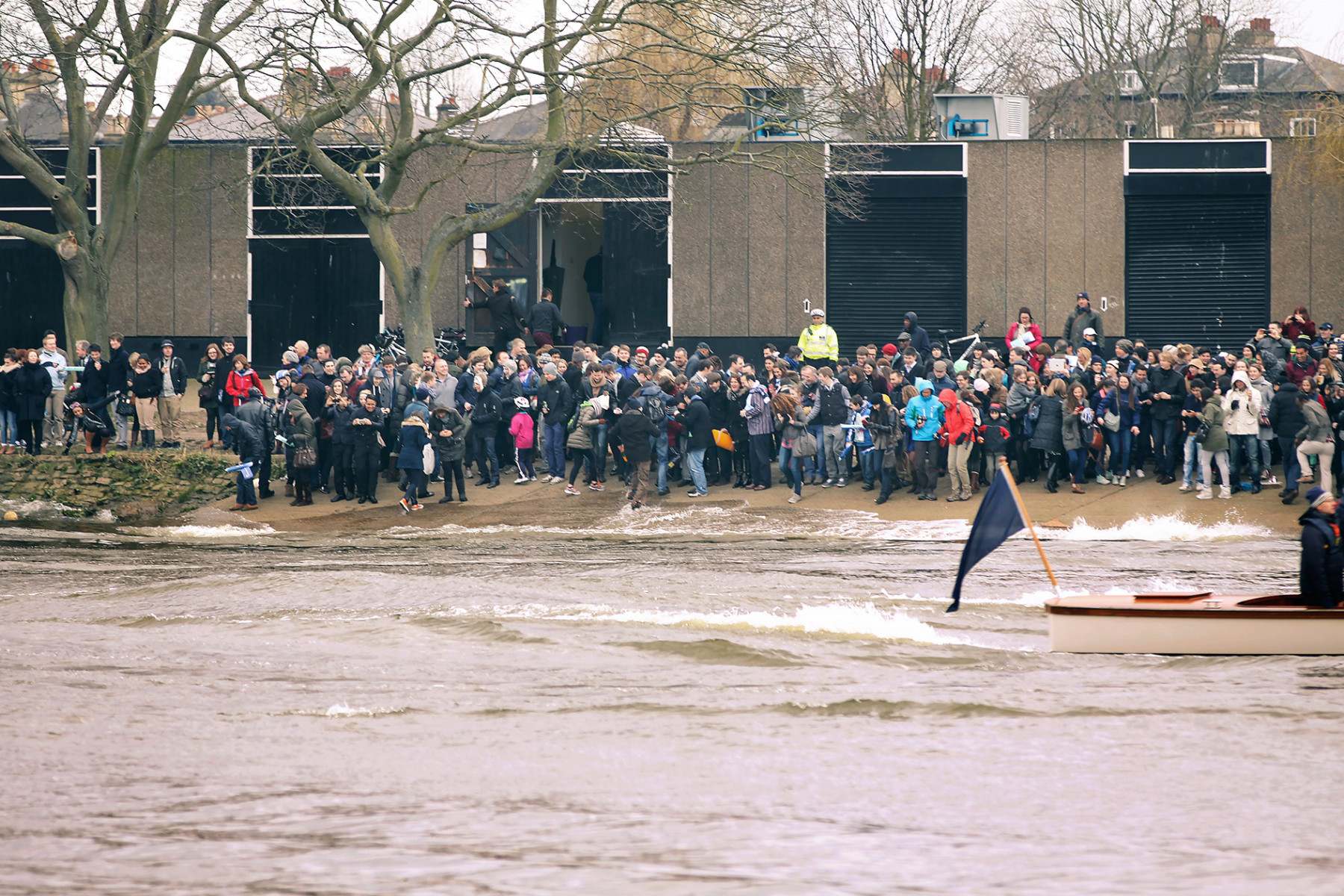 I’ve always gone to the race for taking photos, but I’ll admit that I’ve not really been that successful for getting photos of the race itself. I’ve got a few photos of things happening around the event that I’m pleased with, but just not the race. Maybe the pubs are too close…

The race this year is held on Sunday April 6, at 6pm along the river Thames. It starts at Putney Bridge and finishes at Chiswick Bridge around 17 minutes later. View the official site for more information. If you’re also going to watch the race, give me a shout and let me know!

Below are the only successful photographs that I have taken whilst at the Boat Race in recent years. Maybe this year I’ll be able to get something a little more substantial.

My gallery of other images from across London continues to grow in my portfolio. You can view some new ones that were put up this week with views from the Shard that got lost in my library over the summer last year.