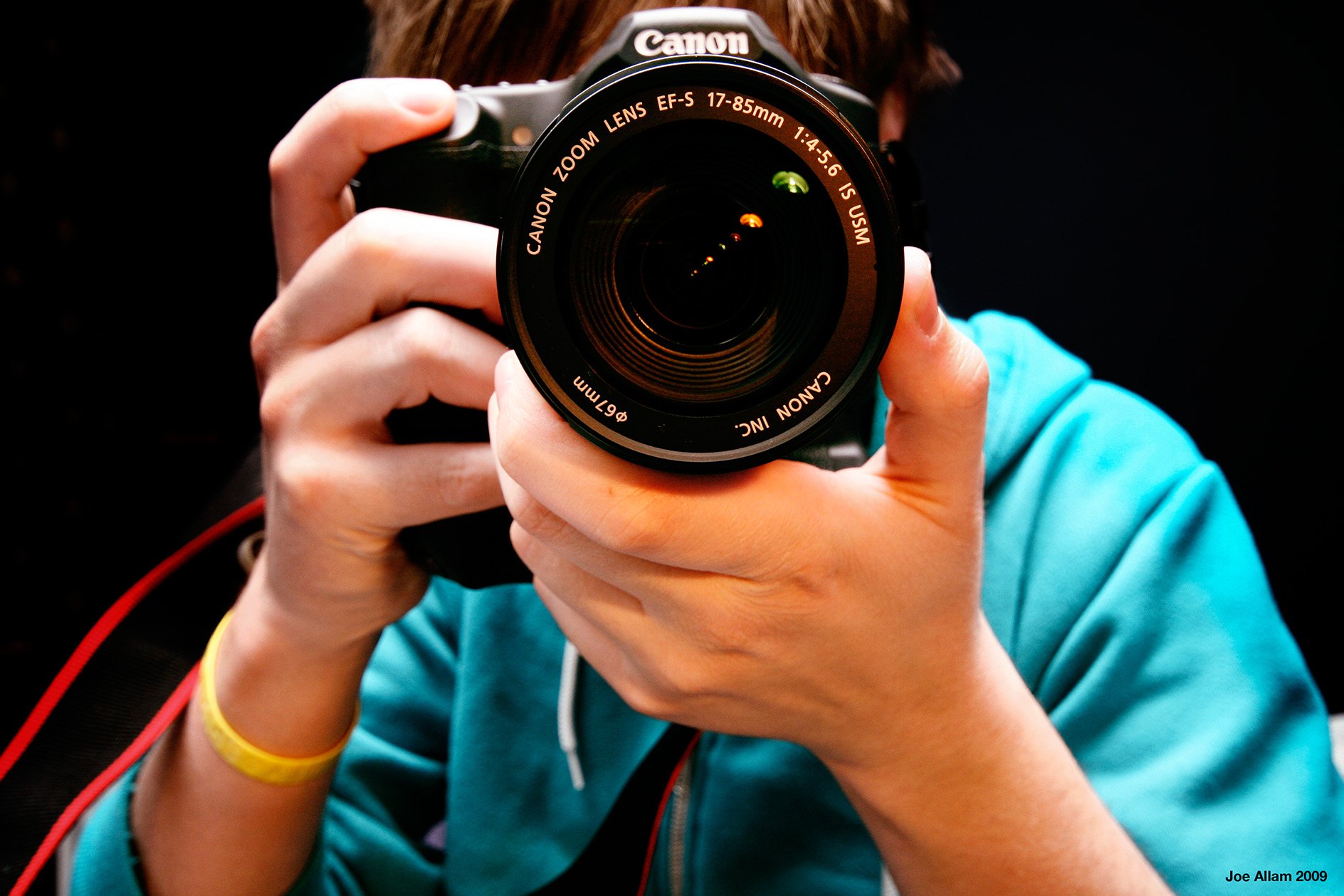 The 50D at the time, was revolutionary for the prosumer market bringing the all-new Digic IV processor and magnesium alloy body from the pro models down to the more consumer focused mid-range cameras. At the time, Canon had only one video DSLR, the 5D MkII. This was way out of my price range and so I purchased the 50D as the next model down, thinking that I should wait a few years until video functionality made its way into more affordable cameras; and hey, by then, the quality should be amazing, right? Well, skip forward 5 months and Canon released the 7D. Effectively this was the same as the 50D albeit with stunning video quality and slightly better specs all round. I’ve been kicking myself ever since.

I remember shortly after transferring Apple stores where I worked, talking to a fellow member of staff about the new 7D. He showed me a video that amazed me so much that I still remember it vividly and think about it every time I think of SLRs having video capabilities. The guy who showed me this video was Steve Booker. Steve bought that 7D and ever since has spent the past few years getting into filmmaking. This is the video he showed me. Again, I wish I bought that 7D, but good for him to seize the opportunity and rack up almost 50,000 subscribers on YouTube in the meantime.


Letting those 5 years pass behind me, I did very much enjoy my 50D and still do love it; but the time has come to upgrade my camera and finally have an SLR that can shoot video. Which is exactly what I have done. Last Thursday, I ordered a Canon EOS 70D along with some other equipment as I wanted to have a new camera in time for my trip to Paris next month. This camera is the second upgrade to the 50D following the 60D (obviously) and brings some new technologies that enhance video production including huge improvements to autofocus during filming, alongside Wi-Fi connectivity, a touchscreen display, faster processor and a better quality sensor. Check out this review for more information on that:


For the past year or so I have been waiting for an upgrade to the 7D and have been following various Canon rumours to see when this is likely to be released. Though as I mentioned, I desperately wanted to buy a new camera in time to take with me to Paris next month and so I have decided to get the 70D… for the time being. When the 7D MkII (or whatever it will be called) is released, I will need to look over the specs and decide whether to sell my recently purchased 70D or not.

Considering the past weekend was Easter weekend and I ordered the camera and other equipment on Thursday – the day before Good Friday – imagine my utter surprise when it was delivered at 9:30am on Easter Monday. All the way from Hong Kong! 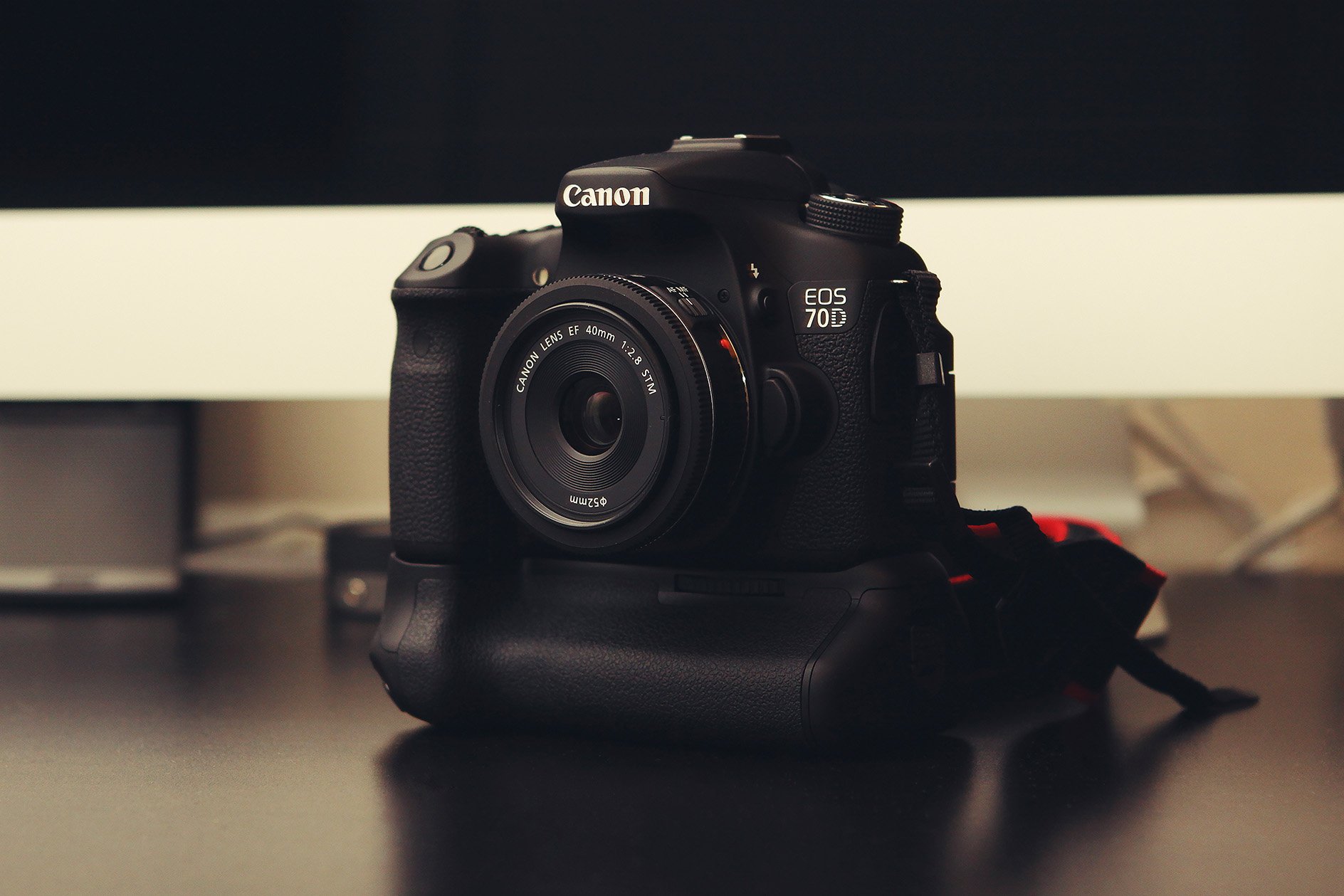 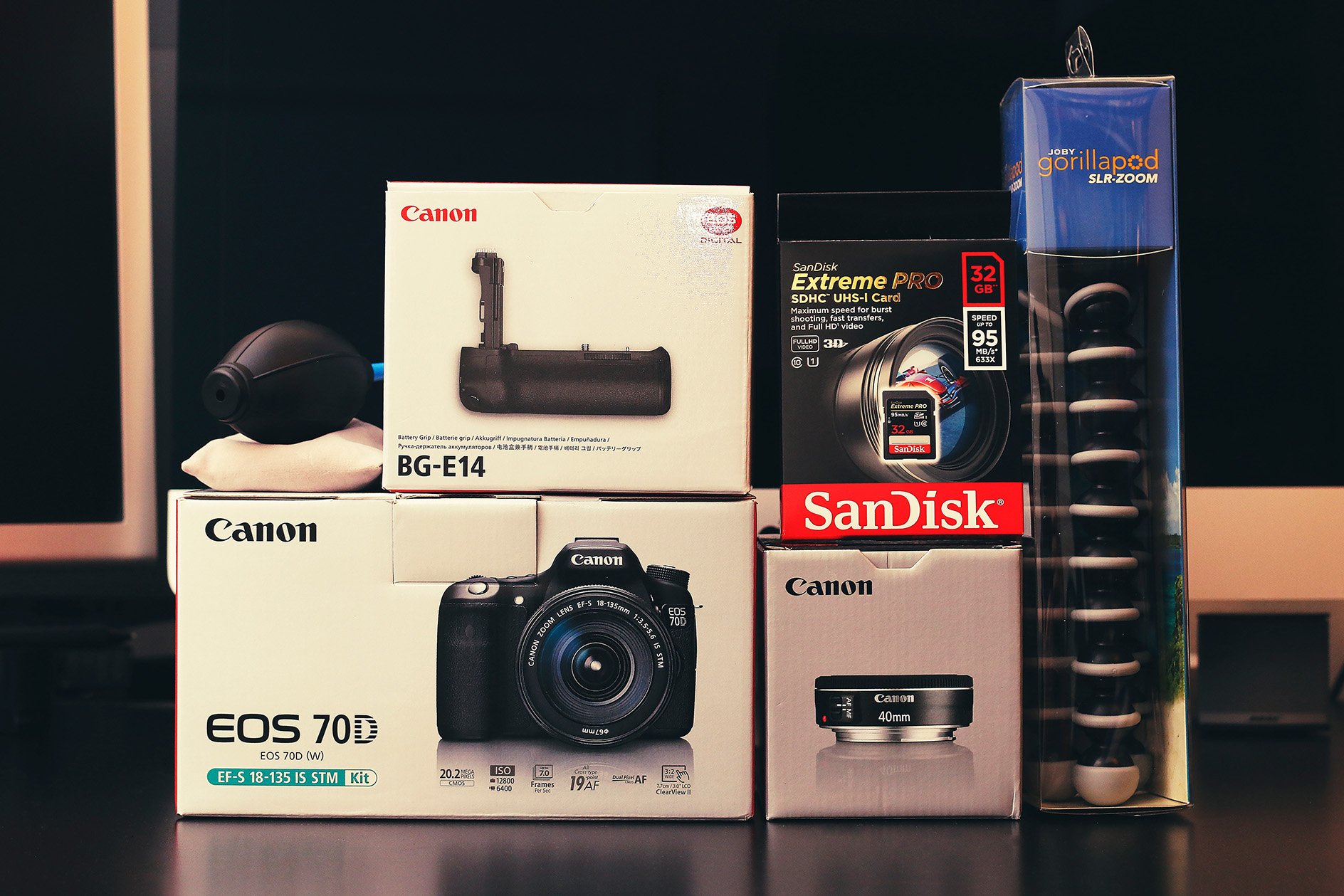 All the other goodies I bought for my new camera.

Stay up to date with my adventure into filmmaking by subscribing to my updates by email.

So what did I buy? I’ve listed all of the items below and a short description on why I bought them and where from.

The camera itself. As I mentioned earlier, I’m desperate to have a new camera for my trip to Paris and really want to get into filmmaking. The 70D offers the latest technologies for filming from Canon and still rocks a great system for photography. One feature of the 70D that may not make it to the 7D MkII or other top-line cameras is the flip-out screen. This is a feature definitely aimed at consumers who want a good camera, but want to use the LCD to frame their shots rather than look through the viewfinder like you’re supposed to. The flip-out screen does however work exceptionally well in video situations as it allows a much easier access to more obscure camera angles.

I bought a battery grip with my 50D and it’s one of the best camera accessories I’ve ever owned, purely for the portrait shutter button and balanced weight when shooting with longer lenses. I doubt I’ll ever buy another camera again without the designated battery grip to go with it.

The battery grip takes two battery packs for doubling the amount of shots you can take on a single charge. This is the battery it takes.

I first saw this lens in a review on YouTube and decided I’d give it a go when I saw that it barely costs more than £100. I’ve had a 50mm f1.4 for a few years now and love the quality of the image it produces, so I’m pretty excited to see what I can get out of this pancake style 40mm prime lens. The fact that it’s a pancake style also makes it super portable when carrying it around.

All of my previous cameras have used Compact Flash; which I still firmly believe is the best type of memory card around for its reliability and solid construction. However, the 70D and most newer cameras now take SD cards – much to my disappointment – so I had no choice but to buy a new memory card for use in the new camera. I’ve been a SanDisk user for many years now and wouldn’t buy anything different. I simply trust them for quality, speed and reliability. The Extreme Pro (95mbs) should be fast enough for a heavy amount of film work that I plan to be doing.

DigitalRev had a little offer with the camera and battery pack coming with a gift pack. So this was more of a bundle purchase really. Inside the pack is a cleaning cloth, rocket blower and a couple of lanyards to attach to some things as well as a nice little pouch to hold it all together.

I remember when these were released a few years ago and have wanted one for a while due to their ultra-portable size and malleable legs that can grip onto pretty much anything. When I saw one in John Lewis over the weekend, it was a bit of an impulse buy and I’ve not been able to really use it yet, but hopefully in Paris it will come in handy at some point.

A couple of weeks ago, I saw this bag featured on the LowePro website and thought it looked ace. I currently have a few camera bags; two of which are backpacks. My smaller backpack, the original Fastpack 250 has been great for when I don’t want to carry a full camera kit with me, but still have my MacBook Pro with me, though it still had a few problems and style issues. The Transit series is overall a much smarter looking bag and has some great improvements. I’ll probably go over these in a separate post as I’ll probably just waffle on for a bit.

All of the equipment I bought, aside from the bag and Gorillapod came from DigitalRev. If you’ve not heard of them, I highly recommend taking a look. They’re based in Hong Kong and run a very successful photography channel on YouTube hosted by Kai Man Wong – who I find geekily hilarious by the way – and they also have an online store that seems to have everything for sale at a much cheaper price than the UK and with free shipping too! Not even an unexpected customs charge is applied on delivery because of special arrangements between the UK and Hong Kong for prepaid VAT. On top of all this, they were able to deliver my equipment over the longest and busiest bank holiday weekend of the year before it had even finished! Awesome. I’ve had great things to say about DigitalRev before and now I think I have fully cemented them as my go-to location for reviews on camera equipment and ultimately buying the equipment itself.

I’m super excited to get going with this new camera for everything that I’ve already grown to love about photography; but I think I’m most excited about exploring the world of filmmaking and seeing if I can add another leg to my portfolio of creative skills.

So, watch this space…