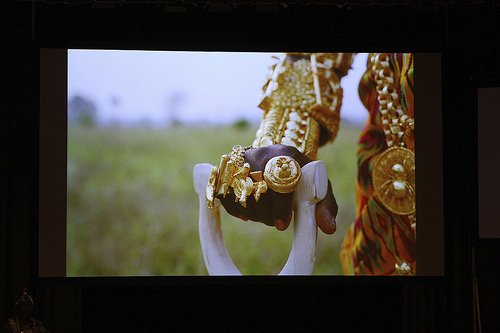 There was an actual real life King at TYPOLondon. Yes, a King. There had been quite a following generated over Twitter for this event and was predicted to be one of the most popular lectures of the whole series. It sure was indeed! Packing out the Logan Hall, Julian Zimmermann and King Bansah put on a brilliantly hilarious show. I didn’t quite know what to expect before it all started but Julian set the scene well with an opening 10 minutes about who the King is and what he did, before the King himself came out onto the stage.

Togbe Ngoryifia Céphas Kosi Bansah Was born in Ghana, where his Grandfather was King of the Hohoe region. In many parts of Western Africa, Germans had made settlements and created civilisations to which they were noted for their discipline and organisation. It was because of the German mentality that Céphas’ Grandfather and Father decided to send him to Germany to learn a trade and start a profession to earn money for the family back in Ghana. In Germany he became an apprentice at a garage and learnt to be a car mechanic as his main income. However, he also worked as an entertainer singing and dancing at events such as weddings and even on TV a number of times. Things were running smoothly until one day he received a fax to say that his Grandfather had died and that he had been selected to be the new King of Hohoe, Ghana. Bansah had to make a swift return to his country and take on the new role as a King. It was revealed in the lecture that he was chosen to be King rather than his Father or his eldest brother because of the simple ruling that in Ghana, you cannot have a left-handed King. Céphas Bansah was right-handed and therefore was the first in line who was eligible to become the King. It seems pretty ridiculous but it’s more of a qualification than the rules that we apply to our monarchy. As his story developed we all began to realise just how unique King Bansah is. He’s such an open and friendly person with an amazing sense of humour and entertainment that just throws smiles on everyones faces.

“It’s not easy becoming King” he states as he mentions the amount of work he has to do to raise money for the 206,000 people that he has to support in Ghana. He still works and lives in Germany and has endorsed many products and toured as a Royal figure throughout Germany, opening stores, kicking off football matches with legends such as the “Kaiser himself, Franz Beckenbauer” and still entertaining with his singing and dancing. King Bansah couldn’t speak English so throughout the whole lecture he was being translated, but half the audience knew the German language anyway so the room was divided into two sets of laughter which made for an even more entertaining experience. Such as when he explained the story about when how he opened a chocolate store in Germany that produced “white and black chocolates”. “I tried to only eat the white chocolate so I didn’t bite my fingers”.

So how does this relate to Graphic Design at all? Well, Julian Zimmermann went to the King to gain research on him as he was going to write his thesis on his lifestyle as a King working from Germany for his Masters degree. Further down the line, Julian approached him again to design an identity for him so that he would be taken more seriously as a King. They worked together for quite some time and traveled to Ghana to get some first hand experience of what life as a King is really like. The two realised that the image they were looking to create was something of an exotic identity that was split between being royal as well as entertaining.

This progressed into a excellent identity that was printed on matt black with gold ink and even had a royal seal that could be stamped onto official letters. Follow some of the pictures to see how it all developed.

Just look at that signature! It’s actually a well thought out and logical signature that represents his family and his Kingdom along with his lifeline of ups and downs.

King Bansah is also working to build a design and crafts School in Ghana that has multiple workshops for areas such as textiles, typography and even a workshop for car mechanics. You can see more of what the King is doing on his website.

I’ll end with a video that I found of one of his singles titled ‘Konig Bansah African Party’.

Hey friends! It’s been a long time since I last

Cruisin’ into the weekend ✌️

Drip-feeding pops of colour over the next few week